COVID-19: WE ARE FULLY OPERATIONAL AND HERE TO HELP YOU! Call us or shop online.

Any Other Tints Available For Pyroceram Glass? 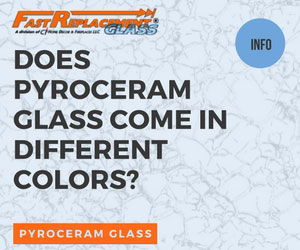 Pyroceram glass is available only in a slight amber tint.

Pyroceram is actually a combination of glass and a transparent ceramic material. It was discovered by S. Donald Stookey, a research director with Corning Glass, in 1953. During an experimentation, Stookey accidentally overheated a fragment of the photosensitive lithium silcate glass that he was working with. This piece, containing silver nanoparticles, resisted breaking when it was dropped. The original discovery became known as Fotoceram, but was further developed to contain quartz and spodumene (a pyroxene mineral). Hence, the crystalline glass became officially known as Pyroceram in 1959.

Spodumene is the element that gives Pyroceram it amber color. This lithium-rich mineral occurs in a variety of hues and tones, some of which appear yellow, yellow-green, and lilac.